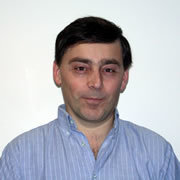 Juan C. Migliore, Professor of Mathematics, is the recipient of the 2018 Father James L. Shilts, C.S.C./Doris and Gene Leonard Teaching Award. This award, bestowed annually on a faculty member in the College of Science, is named in honor of Father James Shilts, C.S.C., who taught in the Department of Physics from 1961 until his death in 1982, and was endowed in 1984 by Dr. Eugene T. Leonard III in memory of his parents Dr. Eugene and Doris Leonard.  Dr. Leonard III was a member of the Science Advisory Council from 1976 until 1991.  The award recognizes a faculty member who has demonstrated sustained excellence in teaching.