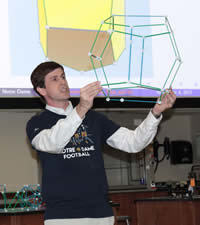 Professor Brian Hall gave a lecture for the Science Exploration Series before the Wake Forest vs. Notre Dame game on Saturday, November 4, 2017. The talk was held in the Jordan Hall of Science with 75 students, faculty, as well as game day visitors.

Abstract: Ancient Greek mathematicians identified five solid shapes with a high degree of symmetry, known as the platonic solids. The most symmetric of these, the dodecahedron, has 120 different symmetries. Crystallographers, meanwhile, identified the possible symmetries of repeating patterns (“crystals”) and found that dodecahedral symmetry was not possible in crystals.

In 1982, however, Dan Shechtman created a specimen that appeared to be a crystal and that had the “forbidden” symmetry of a dodecahedron. This work, for which Shechtman was awarded the 2011 Nobel Prize in chemistry, led to the study of a new class of objects known as quasicrystals, materials whose atomic structure is almost but not quite repeating. In retrospect, similar mathematical structures can be seen in Islamic tilings dating back to the 15th century.

The lecture included lots of stories and pictures!